In Britain we frequently take old houses for granted but in the USA they’re very often seen as much more special. I was reminded of this recently when I arrived on Martha’s Vineyard, in Massachusetts, and picked up a copy of the Vineyard Gazette. On the front page was a story about a three centuries old farmhouse – a house that is perhaps the oldest house on the Island and one of its finest existing examples of multi-century architecture.

As I read on my interest was stirred. Dating from around the mid 17th century, the Mayhew-Hancock-Mitchell house, as it’s known, has 18th and 19th century additions and some wattle and daub in its construction. Remarkably, it is something of a time capsule with few modern amenities – it has no electricity. Thankfully the house and surrounding land is now in the care of the Sheriff’s Meadow Foundation so I called executive director Adam Moore and he kindly offered to show me around.

It was a perfect Vineyard afternoon as we drove out to the 146 acre Quansoo Farm at Chilmark. Here field and forest stretch to the shores of Black Point Pond to the south and Tisbury Great Pond to the east. It’s a place where an unrelenting wind leans against the trees and tall grasses while, nearby, the Atlantic surf thunders on a long sandy beach. The grey, shingled house, patched against the weather, stands alone in this landscape at the end of a track.[metaslider id=2601]Inside only exploratory work has so far been undertaken, including dendrochronology to try to gain a more precise idea of when the house was built. The patina of age clings to the surfaces and for anyone interested in old buildings this is a chance to step through history and understand the simplicity of the construction and the details of the craftsmanship and materials. It’s not a large house but, as Adam explained, there’s still much to learn about how it developed from its possible origins as a missionary meeting house and to consider the best way of repairing it.

There are numerous small details that catch the eye. A wooden door latch contrasting with a more recent iron latch; numerous pieces of pottery and animal bones discovered beneath the floors; the wonky chimney in one of the attics; sections of wallpaper; jars lined up in the pantry; ship drawings and signatures scribed into the timber. There is a detailed examination of the house and its possible development here.

In the future it’s hoped that the house will serve as an educational resource and, as it will not be lived in, its fabric will be unspoiled by modern amenities. Interestingly, there are plans to build a lime kiln to produce lime for use in the project using seashells; local trees will be harvested for timber. 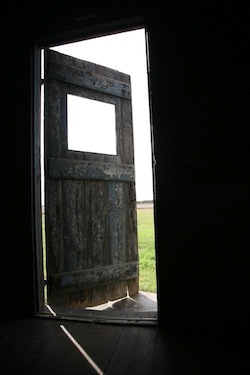 Sheriff’s Meadow Foundation hopes to have the house listed on the National Register of Historic Places and the $1 million repair project, for which fundraising is underway, will probably start next autumn. I hope to visit again and follow progress.