Concrete is not a material readily associated with contemplation and the ability to evoke deep emotions. Certainly, 2,711 large, smooth, grey blocks of the stuff spread over a 4.7 acre site sounds deeply depressing. And yes, in some ways it is. But not because of the material, it’s because of what they signify. This is Berlin’s Memorial to the Murdered Jews of Europe or, as it’s sometimes known, the Holocaust Memorial.

Standing within the undulating ‘field’ of grey concrete slabs or ‘stelae’ that form the memorial, close to the Brandenburg Gate, it’s hard not to be moved. This is the built environment working at its best and at so many levels. Primarily, it is a memorial and has all the cold solemnity of such a place. Beyond that it functions in different ways for different people. Indeed, for many it’s a photo opportunity or playground. What’s remarkable is the way you’re drawn, almost subconsciously, into its confusing, uneasy, maze-like heart where sunlight and shadows constantly redefine the textures and spaces. 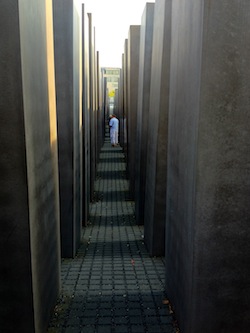 New York architect Peter Eisenman has essentially designed a walk-in sculpture with the stelae arranged in 54 axes from north to south and 87 axes from east to west. They’re made from high quality concrete cast so it’s smooth and polished. Each is 95mm wide and 2.98m long. Heights vary between 0.5 and 4.7m and not all stand vertically.

As the guidebook says ‘these are cold statistics’ but they’re insignificant when compared with those revealed in the subterranean information centre and deeply thought provoking exhibition lying beneath the memorial.